In an alternate universe, Syracuse should have shown better sportsmanship

Share All sharing options for: In an alternate universe, Syracuse should have shown better sportsmanship 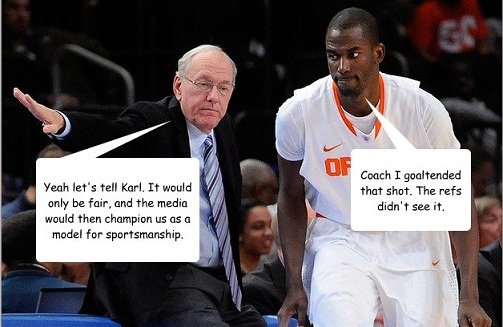 Have you seen that public service announcement currently running on good sportsmanship?
The city league title game is coming down to the wire. A player attempts to intercept a pass, touches the ball but fails to gain possession, only to have the referee award the defender's team with the ball out of bounds. During a quick time-out the player tells his coach that he touched the ball and asks if he should alert the ref. Much to the chagrin of his teammates, the player and coach agree that the right thing to do is to tell the ref the truth and give the ball to the opponent.
Sportsmanship 101! We should all practice it.
In an alternate universe this PSA makes sense. In reality, it is the most insane "do the right thing" idea ever. Players aren't supposed to help the refs; refs are supposed to do their job as best they can.
When Syracuse's Baye Moussa Keita goal-tended West Virginia's Deniz Kilicli's lay-in with less than ten seconds remaining in yesterday's game, that ad immediately came into my mind.
How unreal would it be for a player and a coach to decide that the right thing to do would be to tell the ref what actually happened. In this case, what if Moussa Keita nudged Boeheim after the play and told him he thought it would only be right to have the basket count. This would tie the game and give Syracuse one opportunity to score at the other end of the court to win the game.
It would never happen, obviously, and this botched no-call by Karl Hess just proves how unrealistic that PSA really is.
West Virignia fans are irate today, while their Syracuse counterparts are admittely feeling lucky, knowing full well they got away with one, but also knowing that both programs have been on either end of botched calls in years past.
Congratulations, Karl Hess, you're today's goat in the world of sports.