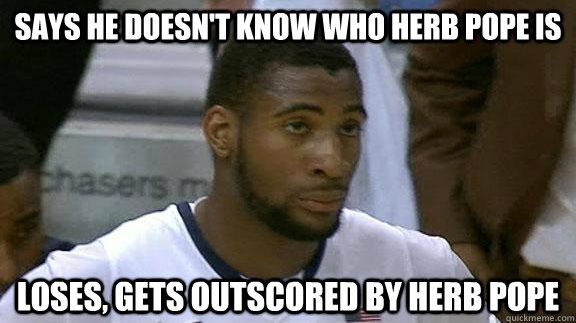 This morning, we learned that UConn's prized freshman Andre Drummond was not familiar with his next defensive assignment.

"I don't even know who Herb Pope is," Drummond told the media following Monday's practice. "I'm not trying to be disrespectful. They said the name to me in practice and I was like `Wait, who's Herb Pope?'"

Whether or not Drummond was truly being ignorant and dismissive of the Big East's second leading rebounder and fourth leading scorer, the Huskies are licking their wounds delivered to them by a gritty, upstart Seton Hall Pirate club this evening.

Falling to 12-2, the 63-75 loss confirmed to everyone that UConn must improve their ability to handle a half-court zone. Tonight's game was the Huskies second lowest offensive output of the season and they were bewildered by Kevin Willard's defensive gameplan. A simple pass to a Husky big man where he must then turn and look opposite is apparently too much to ask out of Jim Calhoun's George Blaney's club.

For Seton Hall, they have now snatched up a signature win in addition to victories over Dayton, St. Joseph's and West Virginia. At 13-2. the bandwagon line has officially formed. Instead of standing around watching one player play against five defenders, the Pirates have overcome offensive inefficiencies that plagued them the past few seasons. Once relying too heavily on volume shooter Jeremy Hazell the Pirates now look liberated, sharing the ball with their second and third options, and feeding off the heady play of point guard Jordan Theodore.

While I'm still not completely sold on the Pirates (can you really continue to shoot around 50 percent from beyond the arc?) the seeds have been planted for a return to the NCAA Tournament.

As for Drummond? He contributed a measley four points on 2-5 shooting, while that Herb Pope guy went for 15 and eight.

I think it's safe to say both will be familiar with one another from here on out.