Getting to know you: the Middle Tennessee State Blue Raiders

Share All sharing options for: Getting to know you: the Middle Tennessee State Blue Raiders 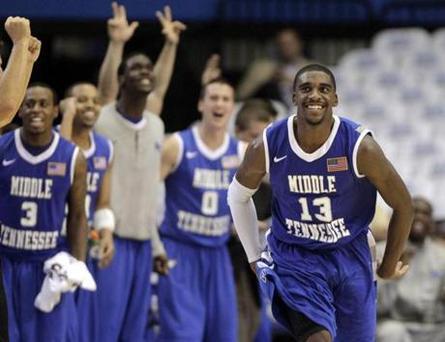 I can't quite recall the last time a loss really helped a lesser-known college basketball team, but Middle Tennessee State is getting a helping of favorable media coverage after being downed by Vanderbilt over the weekend.

The Blue Raiders, a Sun Belt powerhouse that's slowly garnering "at large" consideration, may be one of the most underrated yet dangerous mid-majors in recent years. With Murray State's perfect start leaving the media starry-eyed, MTSU has racked up wins against UCLA, Ole Miss, Belmont and Akron.

Despite losing to the Commodores, the match-up against Vanderbilt was perfectly timed. MIddle Tennessee is on the national radar now and trending up, which is far better than being just a short-term blip in mid-December.

After eeeking one out over MTSU, Vandy head coach Kevin Stallings said, "They're physical, they're good, and they play hard. They played really hard. If they play this hard all the time, then they'll be in the NCAA tournament, I think."

Hopefully we can provide a bit more insight into the make-up of these guys.

What they're good at

What they struggle at

Despite all this gushing, MTSU is not on the short list of low/mid-majors who are eligible for an at large tournament berth. The Sun Belt is currently ranked 18th by RealTimeRPI.com, and its only sent multiple teams to the dance twice since 1994. The conference is theirs to waltz through, but one loss and their RPI could slip well in to the 60s.