The Morning After Recap: Tuesday, January 31

Share All sharing options for: The Morning After Recap: Tuesday, January 31

Now that the 2012 BracketBuster matchups have been released, we can start to get geared up for the handful of interesting mid-major battles coming our way in a few weeks. Nick already highlighted the top games you need to focus on, but there are nine more that will air on the ESPN family of networks over a two-day span that you should keep tabs on too.

All in all there are 71 games scheduled for this year's BracketBuster extravaganza, and it's a really cool thing that such a heft portion of the country is able to get involved like this. BracketBuster Saturday is annually one of the most exciting non-March college basketball days of the year, and we can't wait to see the cream of the crop on the mid- major circuit close up.

* Texas guard Myck Kabongo thinks he was fouled: "He hit me, but it's not up to me to make calls. You can't control those things." (Houston Chronicle)

* UCF actually played a real game against Palm Beach Atlantic during the heart of conference season. No word on whether PBA will also be joining the Big East at any point. (Central Florida Future)

* Huggins yells 'TRUCK', gets T'd, is informed he was T'd for yelling something else, goes apeshit, incites the fans, feet are collectively stomped, objects thrown on court, mascot spears rival fan with musket, world ends. (The Smoking Musket)

Frank Haith - When the opposing team has a chance to beat you, and you know your adversary is busy drawing up the one perfect play to slice up your defense, what on Earth do you do? Do what Frank Haith did on Monday night: Switch to a 2-3 zone defense and flummox the hell out of five Texas players who were visibly unprepared for such insanity. We know Missouri ended up winning game, but Haith won the night in a landslide.

Eastern Illinois - The Panthers led Southeast Missouri State, easily the second best team in the OVC, by five points after the game's first 20 minutes on Monday. You could say things were going rather swimmingly. And then, well, the second half happened. It's remarkable this is even possible, but Eastern Illinois shot just 2-for-18 from the floor over the next 14 minutes and proceeded to get blown out of the gym. The 74-53 final tally was hardly indicative of the legit work the Panthers put in, but who's fault is that?

KEVIN MURPHY-TENNESSEE TECH - The 6'6" senior gave us our first 50-point game of the season, and he did it on a night where he was able to stand out from a handful of other storylines. Unfortunately, only 1,503 people were in attendance at Hooper Eblen Arena (actually exists) to witness Murphy take a historic dump on the TTU record book, but it was an outstanding achievement nonetheless. Here's Murphy's line, in all its glory: 34 minutes, 16-of-21 FGs, 3-of-9 3Ps, 12-of-14 FTs, 50 FREAKIN' POINTS, 7 rebounds, 1 assist, 1 steal, 1 turnover.

1 - Made three-pointer by West Virginia in 11 second half attempts. The Mountaineers shot 4-for-19 from deep on the evening and lost to Pittsburgh by six. 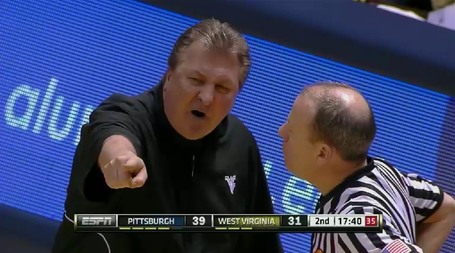