Share All sharing options for: Michigan's Trey Burke is the most important freshman in the Big Ten

Things weren't supposed to go this smoothly. John Beilein's Michigan Wolverines weren't supposed to be quite this good, this fast. Not after the gut-wrenching loss of all-everything point guard Darius Morris to the NBA over the summer. And not when the keys to the offense were being tossed wearily to a first year kid ranked 94th overall in the 2011 class.

And yet here Beilein's Wolverines sit at 12-2, proudly ranked among the top 15 nationally and looking like even more of a complete team than the one with Morris a year ago. As crazy as it sounds, it has been the oh-so-undervalued Trey Burke, Morris' replacement at the lead guard spot, who has this Michigan team looking like the most dangerous one of Beilein's Ann Arbor tenure.

Burke entered the year as the 11th highest rated newcomer in the Big Ten according to Scout.com, and he and fellow UM signee Carlton Brundidge were each expected to compete for serious time in the backcourt this season. Not surprisingly, it was Burke who grabbed the starting spot immediately. With a big game in a win over Memphis (14 pts, 4 asts) and then a flat-out impressive performance a day later in a near-loss to Duke (17 pts, 9 asts), that whole 'point guard competition' became a distant memory by late-November.

But how has Burke actually made Michigan more effective than Morris did? It's simple, really. He's doing more with less.

It didn't seem plausible for Burke to step in and produce Morris-level stats right away. But through 14 games, the freshman has managed to fill the shoes of his predecessor. A case can even be made that Burke has been better in some aspects. Take a look at how the two stack up:

More with less. Burke is consistently giving the Wolverines 34 minutes each night at the point, scoring about the same and basically giving the ball up at roughly the same rate. He's not dominating the rock like Morris did, and while Burke probably won't flirt with massive assist totals as often, the low usage rate means that that Michigan's talented wing shooters get a handful of extra looks each night. That's key.

Going further, Burke's propensity for the three-point shot gives Michigan a new dimension from its point guard spot. Here's how each guy scored his points over their first 14 games: 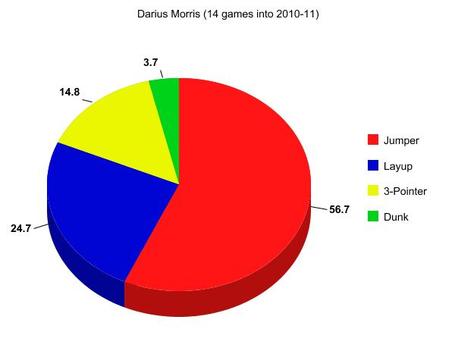 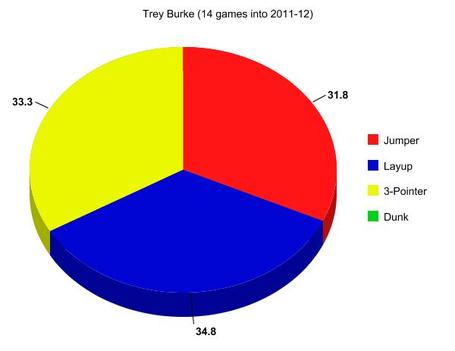 In a nutshell, Burke is making way more threes and still getting more layups than Morris did after 14 games, and that's extremely significant in a Beilein offense. For as talented as Morris was, he attempted far too many contested jumpers, and the data above exemplifies this.

When you couple the scoring breakdown with the usage rates and point per game averages from above, we start to see two surprisingly different players putting up surprisingly comparable stats in the same role. Morris worked much harder for his numbers, which were slightly better, whereas Burke has been the more efficient, and more complete, offensive player.

The thing is, Burke isn't setting up his teammates quite as much, but the offense flows slightly better when he's the guy running it. Being equally as quick off the dribble as Morris, and a much, much more viable threat from the perimeter adds yet another wrinkle to Beilein's offensive sets. It also means the days of killing clock and settling for long, contest two-point jumpers are less likely with Burke at the helm. The freshman scores on jumpers, three-pointers and layups with basically the same regularity, and that's quite impressive. He's the literal interpretation of basketball's triple threat.

In a way, it's almost as if Burke being less of a star, and less of a go-to guy than Morris has opened a previously-unseen door for Beilein's team. Because of this, his overall importance to Michigan's hopes and dreams for the season, and maybe even a Final Four, is absolutely immeasurable. Indiana's Cody Zeller is a surely a phenomenal talent, but we knew that coming in. As predicted, Zeller has helped make Indiana dangerous, regardless of whether we all vastly underrated how utterly dangerous they'd be.

But Burke is truly a special case. The Wolverines desperately needed somebody to run this offense when Morris declared, and the fact that they stumbled on a kid who possesses arguably a more beneficial skill-set is pretty amazing. We still have a long way to go in the season and have barely scratched at the surface of conference play, but 14 games from Trey Burke was all we needed to see. We might be looking at the best freshman in America's best conference come March.