Share All sharing options for: Terrell Stoglin is mad, bro

In today's world, there's two ways for athletes to tip their hand to the public that they're ticked off. One is to sulk when the cameras are rolling, the other is to whine on Twitter.

Today, Terrell Stoglin did both.

Down only three at halftime, Maryland was within striking distance for a huge conference road victory against Duke but it slipped away in the second half.

After watching his star player shoot his way into a cold, Terrapins head coach Mark Turgeon benched the nation's fourth leading scorer and let him think about what he did. Stoglin finished with 13 points, but was 0-6 from beyond the arc.

As the game played out, the sophomore sat mean-mugging on the sidelines while his teammates took an 18-point loss on the chin to the Blue Devils. Once he was able to get a hold of his phone post-game, Stoglin let everyone know how he felt about sitting by using a vernacular that some people would call a derivative of Swag. 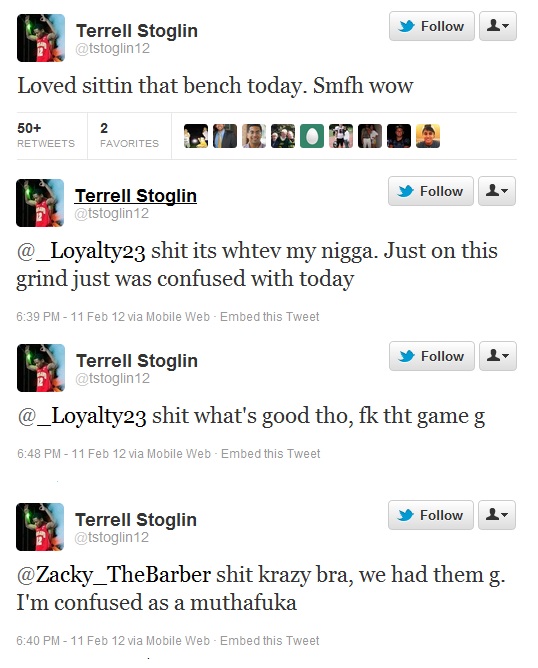 The first time we've seen this from a college basketball player? Absloutely not.

But why not make an example of Stoglin, whose tweets suggest that some of the Terrapins players are not on the same page with each other and/or their coach? It's the lowest of low hanging fruit!

With Pe'Shon Howard done for the season with a torn ACL, it would have been nice to see Stoglin step up his game and leadership abilities. Instead, he's got the college basketball world saying unfavorable things about him and making assumptions about his character.