The Morning After Recap: Monday, February 13

Share All sharing options for: The Morning After Recap: Monday, February 13

The Basketball Points Index (BPI) is here to stay. Hopefully we covered everything you could ever want to know about ESPN's brand new ranking system in our lengthy post yesterday. But one area that endlessly perks our interest is how the common fan will view things now that a new resource has been made available. Is this something that will truly change your daily look into the world of college hoops? And will it be for the better?

Above all, could this eventually turn into a heated BPI vs. KenPom debate (maybe it already has)? If so, who among the masses will be making their voice heard from the BPI camp who doesn't already work for ESPN? Anyone....anyone? Bueller? It seems odd that fans will flock to the BPI solely because it claims to be the best measuring system around from the onset, even if there will certainly be some who feel ESPN is a more credible source than a one-man entity like KenPom.

A new era in our stat-crazed sports world has emerged, and numbers are sure to be flying at you left and right from here on out. The system you ultimately decide to embrace, though, is your call. At the very least you can thank ESPN for giving you another option to choose from.

* For once, rebounding margin actually did tell the whole story: Stanford finished +26 over a woeful USC team (LA Times)

* Matt Painter's season sweep of Northwestern is now complete, and should pay dividends (Hammer and Rails)

* Time to wake up? Not enough people are talking about Georgetown as a serious national player (Casual Hoya)

Purdue - The cluster of teams lumped in the middle of the Big Ten are each hungry for a chance to let the league's perceived strength go to bat for them on Selection Sunday. And Purdue, and the type of season it has had, is definitely one of these schools. The Boilermakers needed to show something big yesterday on their home floor with a pesky Northwestern bunch in town, and responded in a huge way with a 56-point effort in the second half en route to 10-point victory. Now at 6-6 in the league, Purdue is, almost remarkably, still in the running for the No. 5 seed in the Big Ten Tournament next month.

Pittsburgh - It has been a rough year for Jamie Dixon's kids. With that said, a win on Sunday against an often-inconsistent Seton Hall team would've moved the Panthers to 5-8 in Big East play, keeping even the slimmest hopes alive for a miracle finish in the league and possibly even at-large consideration. But yesterday's 73-66 loss basically signaled a frustrating end to Pitt's season, and come to think of it, it's going to be a little weird not having this team as a major player in the field of 68.

Scott Machado-Iona - The lightning-quick Machado burst onto the scene in the early months of the year, but has fallen out of favor with some when it comes time to be considered as a legitimate player of the year candidate. Maybe last night's triple-double (10 points, 11 rebounds, 10 assists in a win over Marist) can help get some of that momentum back, no? The superbly-talented floor general is now averaging 13.2 points, 10.0 assists and 5.0 rebounds per game on the year, numbers that put him on a pedestal above all else in college hoops at the moment.

11 - Field goals bricked by Bradley forward Taylor Brown, who finished the day 0-for-11 with just one point scored. Usually a bit more accurate, Brown leads the Braves in scoring at 15.3 points per game. 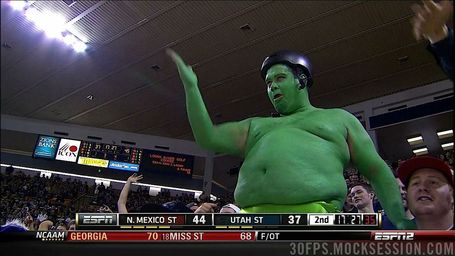