Despite loss, you should actually feel better about Louisville

Share All sharing options for: Despite loss, you should actually feel better about Louisville 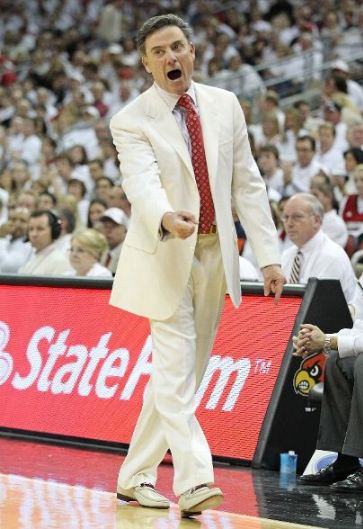 It was one of the uglier games we've seen between two ranked teams this season. Despite the quality of play, one thing should have been made clear: Louisville is going to be just fine.

Nearly written off in January, the Cardinals were the butt of many a Kentucky fan's joke. When things were bad, it was public knowledge that Rick Pitino had beef with some of his players and there were rumblings some players had beef with Pitino.

The tension got to bad that one person actually thought it would be fascinating to play pretend and "trade" the handsome coach to get a consistent scorer into the team's rotation.

But now, winners of six of their last seven, the Cardinals are once again getting back into form during the month of February and finding themselves right where they need to be entering March.

What once was a trend of this program has become its staple.

Currently sitting in sixth place in the Big East after tonight's loss to No. 2 ranked Syracuse, the Cardinals' 8-5 record is nothing to be proud of, but it should be the lowest this team sits in the standings for the rest of the regular season.

To close out conference play, the Cardinals get DePaul, Cincinnati, Pittsburgh and South Florida before heading to the Carrier Dome on March 3rd for a rematch with the Orange

They should go 4-1 in those five games, which would give them a12-6 conference record and likely good enough for a fourth place finish.

Marquette and Georgetown, currently sitting second and fourth in the league, respectively, are likely to maintain their current pace thanks to favorable scheduling, but Notre Dame, currently third in the league, is not so lucky. With trips to Villanova, St. John's and Georgetown, and a home game against West Virginia in which the Mountaineers may be fighting for their tournament lives, means there are few gimmies remaining on the Fighting Irish schedule.

If the Cardinals can finish in the top four of the conference, they'll get the double bye for the Big East tournament and an NCAA Tournament three seed would be theirs to lose. Depending on how they finish in the Garden would dictate how dangerous we perceive them going in to Selection Sunday.

Yes, there's plenty of pain points this team would love to remedy. Free throws, limited offensive threats, Gorgui Dieng against a zone; all should make even the most confident of Cardinal fans fret.

But this team is finally healthy, and when more on what they can do - rebounding, riding the hot shooting hand and interior defense - you have to like their chances with Pitino driving the bus.