The Morning After Recap: Friday, February 17

Share All sharing options for: The Morning After Recap: Friday, February 17 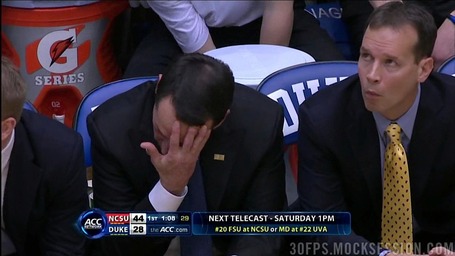 Many viewed Wisconsin's Jordan Taylor as the best pure point guard in America heading into the season. His scoring prowess, coupled with a sparkling assist rate and nonexistent turnover ratio, clearly put him in an elite class when it came time to evaluate the best floor generals in the sport.

But Taylor's senior campaign has been marred with inconsistency, and last night's performance felt almost like a microcosm of his entire season. Sure enough, Taylor managed to hit his not-so-lofty yearly averages during yesterday's loss to Michigan State (13 points, 4 rebounds, 5 assists), and true to form, he still did not turn the ball over a single time. But in a game where he missed 10 of his 13 shots from the field, it was another largely hollow performance from the guard who once terrorized defenses for his ability to score and dish.

Taylor's numbers are down virtually across the board. The 43% three-point marksman from a year ago has been replaced by a guy who is lucky to hit one out of every three attempts. The 18-point per game scorer from last season has morphed into a 40% field goal shooter who struggles to hit 15 most nights. Taylor's assists are down, his turnovers up, and his minutes are nearly identical.

It's clear that defenses are keying in on Taylor, and that he really misses having his old buddy Jon Leuer around to take pressure off. But that still doesn't explain the fact that we're seeing a vastly different player this season, and it doesn't excuse Taylor from not being able to adjust to what defenses are presenting him with. There's no question that this kid is a phenomenal talent and has a future running the show at the next level. But, from the way things look right now, it appears that many of us overvalued his ability.

* Duke's Austin Rivers on falling behind: "We can't keep doing this. We can't keep coming into the games and letting teams get leads like this." (Winston-Salem Journal)

* San Francisco coach Rex Walters on a possible game-winning shot to beat BYU: "When it left his hands, I felt pretty good. When I saw it in the air, I didn't feel very good about it. (San Francisco Chronicle)

* Washington's Abdul Gaddy on almost blowing an 18-point lead: "We got bored with success trying to get the game over with." (Seattle Post Intelligencer)

* Michael Snaer heroically saved the day, the game, and FSU's grip on the ACC (Tomahawk Nation)

Lehigh - The Mountain Hawks made things interesting in the Patriot League on Thursday, knocking off a previously undefeated Bucknell team in the most thrilling finish of the night. A magical three-pointer from the hands of leading scorer C.J. McCollum sailed through the net with a mere second remaining on the clock to give Lehigh a 56-53 victory, moving the Mountain Hawks to 8-3 in the league and 20-7 overall. Now just two games back of Bucknell in the conference race, Lehigh put itself in a great position to snag a No. 2 seed at worse in next month's conference tournament.

North Carolina State - Up 16 at half on Duke, things were looking good for NC State's chances at a big-time upset. And by the 11:19 mark of the second half, the Wolfpack held a comfortable 20-point lead that appeared insurmountable. Instead, five minutes later Duke had cut the deficit to just nine points. And, five minutes after that, the Blue Devils, behind back-to-back threes, had already managed to wrestle the lead away. By then, North Carolina State's second half debacle was complete, calling an end to one of the programs most debilitating losses in recent memory.

Justin Cobbs-California - On a team with a pair of guards who each get much more recognition, the 6'2" Cobbs was absolutely electric on Thursday in a crucial win over Oregon. His 28 point-performance (13-of-19 shooting) set a new career-high, and he also added eight assists and four steals. Yesterday's win also marked just the second time all year that Cobbs finished a game without a turnover, which is not a small feat for a guy who played 38 minutes and was a key ball-handler all night. The victory moved Cal into a tie with Washington for first place in the Pac-12, and also kept a pesky Oregon team from making a swift move up the standings.

22 - Points scored in a five-minute overtime period by LIU Brooklyn in its 103-91 win over Sacred Heart. The Blackbirds have now won six straight games, and 15 of their last 16.