Share All sharing options for: Colorado has Pac 12 Tournament fever! 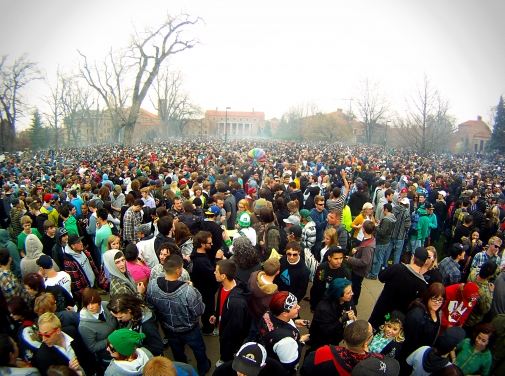 Even when it was competitive, the Pac 12 Conference Tournament was the least interesting to watch on television.

Both literally and figuratively the event is simply not big enough for the Staples Center. Thankfully, with the conference's contract with the Staples Center expiring after this season, it appears that the tournament will be headed to Vegas.

But before the league says goodbye to SoCal, Colorado University would like to create a lasting imprint on the arena.

A historically down year for the league that's rife with parity has given nearly every conference member hope for a trip to the NCAA Tournament. This includes the Buffaloes, who have only danced twice since 1997.

Currently at 10-4 in the conference, the Buffs have a real shot at winning this tournament, and to give themselves some semblance of a home-court advantage, they're footing the bill for some of their most ardent fans to go crazy in LA.

To help bring the atmosphere of the Coors Events Center to both the Staples Center and the Galen Center, 50 of the most loyal CU Basketball student season ticket holders (according to the Student Loyalty Program) will be joining Coach Boyle & Coach Lappe in Los Angeles to cheer on the CU men's and women's basketball teams from March 7-10! CU Athletics will be providing flight, hotel, and tickets to both the Men's and Women's tournament games!

Yes that's right. The athletic department, despite supposedly enduring lean times as they continue to pay former head football coach Dan Hawkins, have carved out a few dollars in the budget to cover all costs for 50 lucky undergrads who have been loyal to the basketball team this season.

Granted these fans probably will get laughed by those free spirited liberal kids living it up in Boulder - basketball simply is not cool there - but the reward shows that hard fandom can pay off. It really is a nice gesture by the school.

The lucky students will be selected following the final CU home game on February 27th.