Share All sharing options for: Darius Miller comes up huge in Kentucky's win over Mississippi State 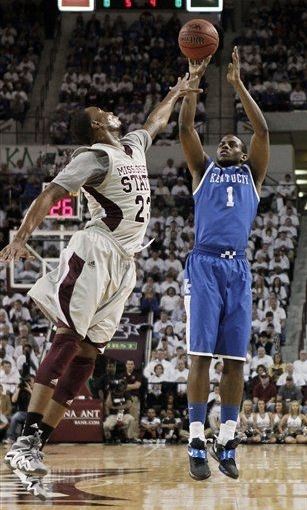 In 2010, the John Calipari's upper-classman leader was Patrick Patterson. In 2011, it was DeAndre Liggins.

Both were vital to supporting Cal in the maturation process of the precocious young freshman being asked to lead the Wildcats in everything you could quantify.

But while Patterson and Liggins will always be fan favorites from their time spent in Lexington, they both were NBA caliber players. They both had their eyes on playing at the next level.

Darius Miller, conversely, is not an NBA player. His skills may take him overseas for a few years, but right now he's living in the zenith of his basketball career.

As the only senior that's regularly part of the team's rotation, Miller is proving to be the cog this program was without for the last two seasons. A gritty player who embraces his role as a true role player. A guy that does everything well but nothing great.

Tonight Miller stepped up in a big way, scoring 12 crucial second-half points which helped UK climb out of a 13-point halftime deficit and defeat the Mississippi State Bulldogs in dramatic fashion.

"I said 'you're out. I'm not gonna play you'," Calipari told Miller after passing up a shot at one point in tonight's game. "And then he made a few shots and I told him 'You're the glue to this team. They count on you to make those shots," Calipari said.

The win kept the Wildcats undefeated in SEC play, earned them at least a share of the regular season title and may have prevented a conference foe from hearing their name called on Selection Sunday.

Given the circumstances, Kentucky could have easily lost tonight and not felt any long-term effects. Mississippi State was desperate, hyped and playing at home. The Bulldogs jumped early fueled on adrenaline, and held a double-digit lead heading into half-time. They were 6-12 from beyond the arc and held the Cats to a measly 28 points - one point below their first-half season low.

In the locker room, Cal could have groaned over a lack of this or lack of that, expressed his disappointment, then turned around and shrugged his shoulders knowing it wasn't really worth expending energy. The loss wouldn't have been deemed a severe slip up, and they still would comfortably hold the South Region one-seed.

Instead of quitting and looking forward to their next opponent, they gutted it out and slowly clawed their way back, led by Miller's three second-half three-pointers. One cut the lead to one with 4:49 left in the game, and a second extended UK's hard-earned lead to four with only 90 seconds remaining.

It proved to be the proverbial dagger.

"Darius Miller, he's the fiber that holds that whole team together," Rick Stansbury told the media after the game.

With Doron Lamb still around as a sophomore and Marquis Teague solidified as the team's starting point guard, MIller's minutes have decreased since last season, but he's continued to serve as the team's heady advisor.

As the wins keep mounting, the NCAA Tournament is becoming the Wildcats to lose. The most glamorous and polarizing team in the country, Calipari may have walked into a "must win the title" situation based on an 85 percent winning percentage over nearly three seasons but no National Championship to show for the success.

Luckily for him, he's got a tough all-around senior - in addition to a few solid freshman - who's been in a few games to ensure that happens.