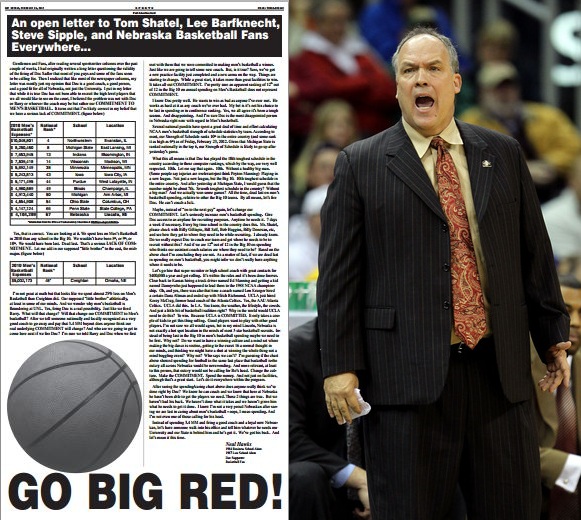 At 4-12 in the conference, the Cornhuskers rank dead last in scoring and points. They've lost seven of their conference games by 15 points or more, and have little to look forward to next season.

Under head coach Doc Sadler for six seasons, the Cornhuskers have never finished in the top half of their conference's standings. They've never earned a NCAA Tournament berth. They've never really been relevant on a local or national level.

Given the cyclical nature of fans, it appears that now is the time to call for Sadler's head, or at least a new head coach.

It may be time for a change, but Doc Sadler is by no means the real problem.

As outlined in a full-page ad in today's Omaha World-Herald purchased by a Cornhusker booster, the school is simply not spending an adequate amount of money to position themselves to legitimately compete in a BCS conference.

The open letter, written by 1984 undergrad and 1987 law school alum Neal Hawks, reveals that Big Red is the cheapest program in the entire Big Ten, reporting only $4.1 million in basketball-related expenses in 2010.

They even spend less on basketball than their "little brother" Creighton!

Part of those expenses includes coaching salaries, of which Sadler's is reported to be the lowest in the conference at $900,000.

Basically, the University of Nebraska can't expect any sort of positive change to occur without proper investment.

Is Sadler the right man for the job? Probably not. But the school is getting what it pays for, and simply replacing him for someone that doesn't command a far higher salary than what the school is currently shelling out to their men's basketball coach would be the equivalent of putting a band aid on a gaping wound.

With a new, state-of-the-art arena scheduled to open in for the start of the 2013-2014 season, and a new gaudy Hendricks Training Complex open since November 2011 - which was mostly privately funded to include things like motion sensored basketballs that light up as you walk past them - the Nebraska administration has a few cards in their hand that, if played correctly, could really change the direction of their basketball program.

If they really care about the sport, they should look to leverage these new facilities with a coach that can garner some favorable attention to help with recruiting and, in turn, wins.