The Morning After Recap: Tuesday, February 28

Share All sharing options for: The Morning After Recap: Tuesday, February 28

During a one-month span from January 21 to February 22, Notre Dame won nine consecutive Big East games. And while the competition during that streak was far from a laundry list of elite programs, it's safe to say at least four of those opponents will probably end up in the NCAA Tournament later next month.

By reeling off such an impressive streak at the most ideal time of the year, Mike Brey's squad garnered national media attention the old-fashioned way for a change: By out-executing opponents. Brey's 'slow burn' philosophy is almost always brutal on the eyes, but has a way of making things hard on teams that don't normally value possessions and/or take care of the ball at the same level.

The issue lately, though, is that for as great as Notre Dame played over that month-long stretch, everything appears to be tumbling back down to Earth. The Irish fell to a depth-deprived St. John's team on Saturday in a game that was both peculiar and untimely, and worse, were completely routed in a pivotal road battle with Georgetown last night at the Verizon Center. In a span of three days, that oh-so-untouchable nine-game winning streak has quickly morphed into a two-game skid.

The same program that was once 12-3 and in sole possession of second place in the Big East is now scrambling to avoid losing three straight. We never bought into the ND hype to begin with, but without a strong showing against Providence to close out the season on Saturday, it will be extremely hard to take this Notre Dame squad even remotely seriously going forward.

* Bill Self on his point guard's inability to guard Keiton Page: "Tyshawn and I kind of got into it because he guarded him miserably when he had 11 straight. Fortunately for us, he was able to match him basket-for-basket down the stretch." (Lawrence Journal World)

* Mark Few on a swift, smooth senior night: "Mission accomplished. We got some other guys that needed to get some run on the floor who needed to get their confidence up and nobody got hurt. Good night." (The Spokesman-Review)

* Going out in style: Only fitting that Georgetown's best win in well over a month came on senior night (Casual Hoya)

* Domination: Bill Self and Kansas wrapped up yet another Big 12 regular season title (Rock Chalk Jayhawk)

Georgetown - It was senior night at the Verizon Center on Monday, and lo and behold, the Hoyas actually played like it. With Hollis Thompson, Henry Sims, and Jason Clark each hyped up about stepping foot in front of their home fans for the last time, the Hoyas thoroughly dominated a shell-shocked Notre Dame squad and kept the crowd buzzing all night long. Georgetown closes its regular season with Marquette this weekend, setting the table for a can't-miss game with the No. 2 seed in the Big East on the line.

Notre Dame - Let's get one thing clear: Losing to Georgetown on the road is hardly a terrible thing for a top 25 squad with the Irish's resume. But even so, the way Notre Dame fell last night hardly inspires confidence in this team's ability to beat elite programs over the next few weeks. How bad was it? The Irish shot 33.3% as a unit, bricked 14 of 17 shots from the perimeter, and worst of all, barely managed to topple 40 points before the final buzzer sounded. And this is the same team that found a way to beat both Syracuse and Marquette? Yeesh.

Tyshawn Taylor-Kansas - Defensively speaking, Taylor was a mess on Monday. But even as he was getting torched by Oklahoma State's Keiton Page at one end, something eventually clicked soon after his coach insinuated that he might need to sit down his inconsistent senior to keep Page in check. Instead of a trip to the pine, Taylor responded by taking the game over and turning it into a one-on-one showdown with Page, a battle he eventually won in the end. Taylor's 27 points represented his third-highest output of the season, even though it's clear that he'll have to work on his game at the other end of the court if he's going to help lead the Jayhawks to New Orleans. 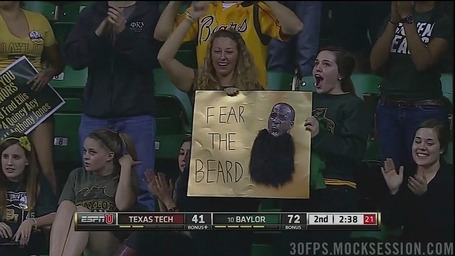 These girls might not be mathematicians, but this head/beard combo is obviously measured to scale (30 FPS)