Share All sharing options for: Bob Knight with his latest (third) known jab at John Calipari 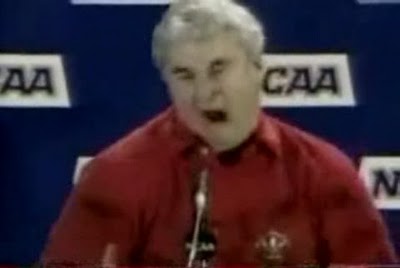 One represents integrity, the other has put two basketball programs on probation.

During today's Mike & Mike in the Morning Show, Knight was asked who he thought were the top five teams in the country:

As you can see, Knight excluded Kentucky, the team that's ranked in #1 in both polls and is in position to claim the #1 overall seed in this year's NCAA Tournament.

If this were Wayne's World, Mike Meyers would be doing that flashback movement right about now.

In the past, Knight has called out Calipari for putting two schools on probation despite getting away unscathed.

He's also accused former Wildcat players of not just flat out not going to class.

That Knight has verbally assaulted Calipari in a public setting more than once speaks to the vastly different philosophies these two coaches practice. It shouldn't surprise you, and neither should be those footsteps you hear from CBSSports.com's Greg Doyel following Knight's radio appearance this morning.

Today Doyel penned a column saying that while most people were going about their day, someone should have held Knight accountable for his obvious attack on Calipari by not including Kentucky on his impromptu list.

It is a bunch a crap, really. Knight gets away with a lot based on his successes as a head coach. If he wants to be a college basketball analyst he shouldn't be able to pretend to not think a clear-cut top five team is not a top five team.