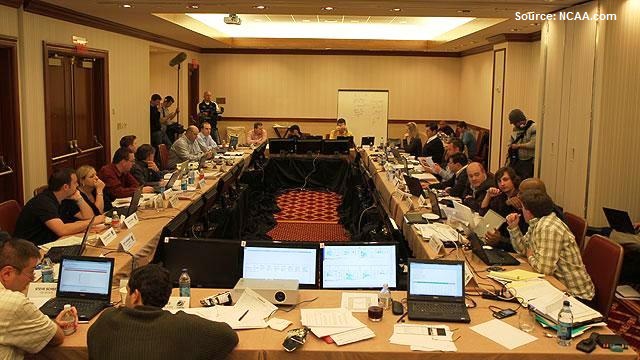 It's become a time-honored tradition on Selection Sunday: spend half your time dissecting the bracket, then the other half complaining about the bracket.

Being a member of the NCAA Tournament selection committee should not be mistaken as a glamorous gig. The lashings these guys take from both fans and media would cut to the core and chip away at the emotional well-being of many.

Get 67 teams seeded reasonably fairly, but whiff on that 68th and your ridiculed.

While the committee chairman rarely offers fair insight and rationale back to the guys in the CBS Sports studio during that annual interview that immediately follows the announcement of the field, the NCAA has slowly sought to be both more transparent in the selection process, and invite the fans to get more engaged.

If you can't appease them, let them join you!

Recently we've seen the NCAA use the media to report back with nuggets of info on their otherwise nebulous ranking factors and also invite media members to a mock selection process to shed light on the evaluation process. Now, the NCAA is taking it a step further by publishing their team sheets for everyone from Texas A&M - Corpus Christi to Youngstown St.

"Any more transparent and you'd install us as replacement windows," Greg Shaheen, executive vice president of the NCAA, tweeted this week.

Yes, this is the same information committee members sweat over for days. Information that can already be found from a number outlets but not arranged in the same color-coded manner. Studying these sheets allow fans to develop a better understanding of exactly what committee members review and debate for days before releasing the field of 68 to the public.

Team sheets clearly show a team's wins and losses against four RPI ranking tiers as well as how a team fared on the road, at home, and on a neutral court. Basically, we see what the committee sees - therefore they're far more accountable for any egregious omissions.

Additionally, the NCAA has organized a fun little "Super 10 Committee" contest, which encourages fans to submit a video announcing their college basketball fandom. From there, 10 winners will be invited to participate in a mock bracket selection process where they will get first hand information on how the field is chosen.

Shaheen, who uses the Twitter medium exceptionally well for a perceived suit and head of a buttoned up organization, may not be overseeing the process for much longer, according to a recent job posting. In his current role Shaheen oversees all 89 NCAA Championships, including the NCAA Tournament. He's incredibly busy.

It would be a shame to see Shaheen move in to a reduced role within the organization based on his work to eradicate the whole us vs. them perception that pervades the tournament selection process. His efforts to date to pull back the curtain and involve more people into the selection process has been a pleasure to see.