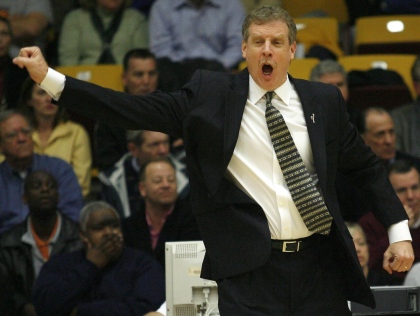 What to Expect
Postseason know-how. The Gaels certainly won't be ones to take this gracious opportunity for granted, and do have a decent amount of tournament experience to fall back on. Last year's squad reached the finals in both the MAAC Tournament and College Insider Tournament, and it's not a stretch to call this current team a significant upgrade in nearly all facets of the game.
After being on the floor for all of these elimination contests, head coach Tim Cluess is confident that his squad will be unfazed by the bright lights. "I think we're more ready for it," Cluess said Sunday. "I think we got beat this year because a team outplayed us, not be cause we were nervous. So I think the fact that we've played in all these games is going to help us on Tuesday."
It better. The BYU Cougars are the first of many daunting opponents the Gaels could have to face, as Marquette, Murray State and Colorado State all loom large as upcoming opponents in the region. The components for the next Cinderella are definitely here, but it's going to take one heck of a run for Iona to shake up bracket pools this month. Then again, this team was a longshot to make the field in the first place, so it might be foolish to count them out again.