Share All sharing options for: Kendall Marshall Injury: The Impact 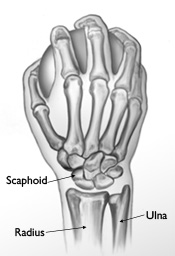 North Carolina guard Kendall Marshall had surgery on his fractured scaphoid bone today, a mere hours after crashing to the floor on a hard foul by Creighton's Ethan Wragge in the Tar Heels' third round victory.

Marshall's status for Friday's Sweet 16 game against No. 13 Ohio remains uncertain, but it's clear that the sophomore won't be able to provide the same type of impact in a limited capacity. A broken wrist, after all, is a broken wrist.

When asked on Sunday whether it was a dirty play that sent him to the floor, Marshall was ambiguous. "It was hard for me to tell," he said after the game. "I watched the replay from one angle, and it was still hard to tell. Hopefully, he had his best intentions in mind of making a team play."

For the Tar Heels going forward, losing arguably the most efficient distributor in college basketball is the definition of a cruel blow. The king of the outlet pass, in addition to the boatloads of easy baskets he has consistently bestowed upon teammates, Marshall was finally starting to find his stroke as a shooter from the outside over the last month.

If he is forced to sit out this week, head coach Roy Williams will almost assuredly lean to freshman Stilman White in at least some capacity. White has suited up 32 time this season for the Heels but has not played more than 11 minutes in any single game. In addition to a moderate dose of the 160-pound White and 6'5" senior reserve Justin Watts, Williams could also turn to 6'7" Reggie Bullock and 6'8" Harrison Barnes to handle the ball for stretches as point forward types, since it appears entirely obvious that a point guard-by-committee situation would play out in Marshall's absence.

If Marshall plays, however, it will be interesting to see how opponents attempt to defend him. Earlier in the season he was almost entirely a pass-first point guard, and defenses regularly gave him plenty of leeway as a shooter. His string of impressive offensive performances as of late went a long way toward changing that, but now it seems the wrist injury could threaten to make him an even more nonexistent scorer than he was back in November.

There's still enough talent in place for the Heels to make it to New Orleans with Marshall watching from the sideline, but the chance to reign supreme atop college basketball appears to have decreased significantly. Non-shooting wrist or not, taking a phenomenal passer like this of the equation is just too damaging, and might just adversely affect North Carolina's stay in St. Louis this week.