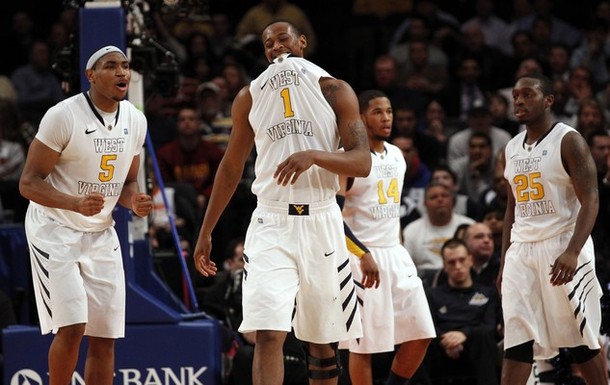 There was 4:21 left and West Virginia was up nine with the basketball.

Jabarie Hinds had missed a layup, but his teammate, Kevin Jones, the Big East's leading scorer and rebounder, grabbed possession and kicked the ball out to Truck Bryant to reset the offense and continue to burn clock.

Instead of making a heady decision and playing like someone whose team is winning, Bryant played like he was losing.

Without even flinching, Bryant heaved up a three pointer that clanked off the rim and sent the Mountaineers big man Deniz Kilicli into a chase for the ball. Kilicli stumbled into a Husky defender and committed his fifth foul, leaving a gaping hole in his team's frontcourt.

The Huskies then went on a 15-4 run to tie the game and force overtime.

In the extra session, WVU went 0-11 from the floor, peacing out of the Big East with their tail between their legs.

Had Bryant not hucked up that ill-advised three the Mountaineers may still be a Big East basketball team. UConn may be nibbling their finger nails off all the way up until Selection Sunday.

Fans would get to admire Deniz Kilicli's beard for one more afternoon!

It's funny how single moments can turn the direction of a game so sharply.

Watching Bob Huggins and his coaching staff bark at Bryant for making such a poor decision immediately spelled doom for this team.

The Mountaineers are not going to the NCAA Tournament. They needed to win today to stay relevant.

The blame for their stage left exit from the Big East's Broadway stage should be placed squarely on Bryant. He shot poorly from the floor, and shot the ball when he shouldn't have.

That will be their lasting memory for fans of their former conference. Out like a lamb.