With Rodney Hood transferring, who's left at Mississippi State?

Share All sharing options for: With Rodney Hood transferring, who's left at Mississippi State? 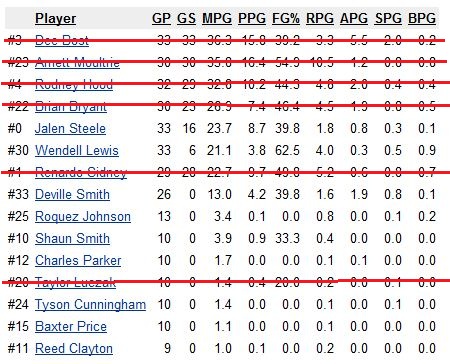 We have our first "Oh, my, are they going to be horrendous" team of the off-season, and that team is the Mississippi State Bulldogs.

The school fired Rick Stansbury after 14-seasons and replaced him with former Clemson assistant Rick Ray, and now this: promising freshman Rodney Hood has decided to transfer.

As a result, Jalen Steele and Wendell Lewis just became sort of important.

A quick scan of last season's depth chart shows that this team is going to be a bit thin next season. With Hood now leaving for what's likely to be greener pastures, the Bulldogs have lost a whopping 77 percent of their offense from a year ago, including five of their six highest minutes-per-game guys.

What a tough start to Ray's new gig.

You probably don't need a reminder, but this is not the University of Kentucky. There are not a handful of elite recruits coming in ready to contribute immediately. The Bulldogs incoming freshman boast no player of incredible talent, or least somebody that jumps out at you as someone that could make an immediate and consistent impact.

That's not to say that this group of kids can't develop and improve over time, but the Bulldogs are in an unenviable position where a number of players are going to find themselves in roles that demand more than just spot minutes off the bench when a starter is in foul trouble.

After limping to an 8-8 SEC record last season, a year of promise turned into a disaster by mid-February, and it continues to get worse.

There's no doubt the Bulldogs will be a projected league bottom-dweller along with a few other struggling SEC-West basketball programs in 2013.

This is setting up to be some disaster in Starkville.