Share All sharing options for: Searching For: Joey Dorsey

Sam Meyerkopf is the co-creator of Euroleague Adventures. He attended and covered the Euroleague Final Four last month in Istanbul, Turkey.

During the event Sam was diligent enough to steal a few minutes from players college basketball fans remember so well. 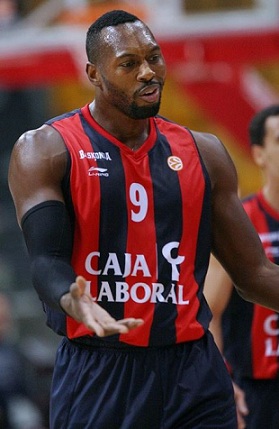 It hasn't been the easiest road for Joey Dorsey.

He missed out on a NCAA National Championship because his teammates couldn't hit free throws. Then he was traded on draft night for Nicolas Batum, and he couldn't of known Nic was going to be this good. In his first two years between the Rockets and Kings he played a total of 18 games and logged some D-League minutes. Then he finally got a break with the Raptors, playing 43 games in 2010-11, starting 12, and looking like a potential rotation big. Owners put locks on gym doors and he was forced to put his NBA aspirations on the side for a minute and go get a paycheck in Europe.

First it was suiting up for Caja Laboral in the Spanish and Euroleague. Playing for notorious hard ass head coach Dusko Ivanovic, he got pulled every time he missed even one defensive assignment and eventually was cut loose in early January. Butas fate would have it, Olympiacos was looking for a defensive minded center and scooped him up the next day. Joey packed his bags yet again and headed for Pireaus,Greece.

From the moment he touched the court for Olympiacos, he was effective and asone Greek journalist close to the team told me, "changed the course of Olympiacos' season." Dorsey was given freedom by coach Dusan Ivkovic and flourished as anenergy offensive player and rim protector.

Then, all of a sudden, Dorsey was back in something he is very familiar with, a FinalFour. Except this time it as the Euroleague version and his team he wasn't coming away empty-handed. After Olympiacos' semifinals win over Regal Barcelona, Iasked Joey to compare the Euroleague version to the college, "I was just talking to Acie (Law) about this and we were saying how similar it is. The preparation,the attention, how intense the games are, it's all the same." Then after the championship game after Olympiacs beat heavily favored CSKA Moscow on a last second shot, I reminded him that he just got revenge on ex-Jayhawk Sasha Kaun who plays for Moscow. He responded, "I totally forgot about that, you're right, that's crazy."

Now a championship winner, Dorsey is contemplating staying in Europe and possibly Greece for even longer. He mentioned his new coach being a big reason why, "Coach gave me so much confidence coming here, we sat down and he told me what he wanted me to do for this team, and I think Dusan is just a players coach. I talk to him about off the court stuff and everything. And when you got that type of communication with your coach you'll have so much confidence. "

Most players that come right over from the NBA have a tough transition because they're just thinking about how to get back across the pond. Dorsey came in with a different approach and it's paid off exponentially. He was so focused on the game and winning. He even forgot who his opponent in the paint was last time they fought for a title and I'm sure after remembering, that championship tasted even sweeter.

Dorsey was laughs and smiles whenever I talked to him and staying in Europe longer, well now that doesn't sound so crazy.