Is an academic fraud case brewing for North Carolina basketball?

Share All sharing options for: Is an academic fraud case brewing for North Carolina basketball?

On Thursday, The Big Lead published an investigative piece on the University of North Carolina's potential academic scandal as it pertains to their basketball team.

While the piece offered some new information, it's still unclear whether we should take this story to a new level of significance.

The biggest takeaway is that there may be credence to the idea that Deborah Crowder, a former administrative assistant for the school's African and Afro-American Studies department, may have given basketball players special treatment as an administrative assistant and that players were pushed into that field of study by one of Roy Williams' long-time academic advisers. But still though, there's no direct evidence that would support an actual case linking UNC and Roy Williams to academic fraud.

After looking at GoHeels.com - UNC's official athletics website - and the school's student directory, you get a mixed bag of information when it comes to what the 2011-2012 basketball team was studying during the season. At the very least, TBL's reporting is correct that African and Afro-American studies is currently no longer a "preferred" program. 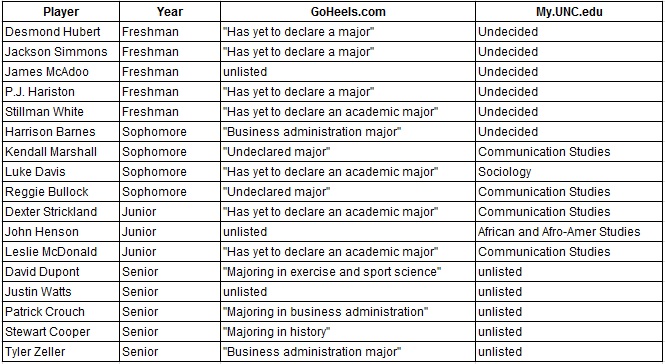 At first glance, it looked as though there was a disconcerting trend: players were simply taking general electives with no set plan or major in mind. But after cross-referencing that information with what was available on school's student directory, you see that the information published on GoHeels.com suggests the site's managers simply neglected to update player's academic information. It's not wrong, just vague and out-of-date.

Only the recently departed John Henson was majoring in African and Afro-American studies, while the majority of the teams's sophomores and juniors (freshman are almost never required to declare a major and outgoing seniors had been wiped off the school's directory) are currently in the university's Arts & Sciences school majoring in (general) Communication Studies.

The issue at hand here isn't that a lot of North Carolina basketball players majored in Afro and African-American studies. It's that players may or may not have been coddled into a cozy environment that allowed them to breeze through a bevy of simple, sometimes independent, study courses. Instead of learning about human rights issues in Nigeria, you're spending a semester on interpersonal conflict management.

Neither is too mind-bending.

Every school, whether it be North Carolina, Kentucky, Stanford, or Austin Peay, will have student-athletes in cake-walk classes. It's a staple in the college culture. Whether or not these schools - all schools really - are committing academic fraud based on the level of assistance and preferential treatment they are giving to student-athletes requires far more investigative work than what meets the eye.

Sure, we're probably past the point where Roy Williams could "give a flip" about all these allegations, but we're also not even close to substantial claims and evidence that academic fraud is pervading the North Carolina basketball program.