Syracuse basketball may be invading outdoor courts on campus

Share All sharing options for: Syracuse basketball may be invading outdoor courts on campus 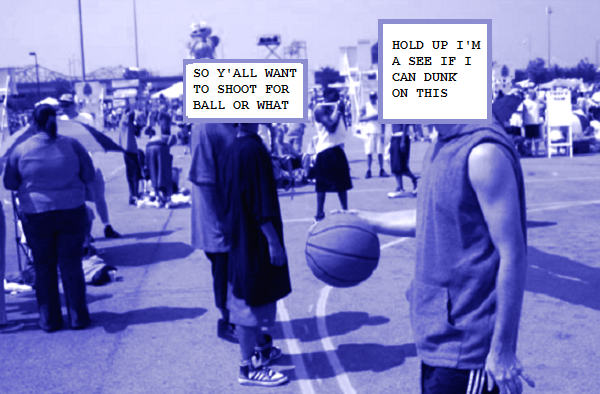 So Jim Boeheim is currently in London enjoying the ride as a Team USA assistant coach. Likely, he's had a lot of time to think and ponder.

While at the 2012 Summer Olympics, Boeheim has penned journal entries for the Post-Standard.

He's taken in the sights of London with his family with firm indifference or appreciation for his surroundings.

At some point, he's probably looked down the bench at Mike D'Antoni once or twice, juxtaposing his relationship with Carmelo Anthony with that of the former New York Knicks coach, while chuckling to himself.

While he's been across the pond, Boehiem has also apparently come up with a solution for the Orange to prepare for their November 9 game against San Diego State to be held on the USS Midway Museum.

He's taking it to the streets.

That's right, Syracuse undergrads, your next horribly played pick-up game may be interrupted by the 2012-2013 Orange roster, as Boeheim has stated he intends to practice with his team outside this fall to get them accustomed to the unique conditions they will face in their season opener.

"I don't know if it will make a big difference, but it might," Boeheim told the San Diego Union-Tribune.

While you simply cannot replicate the playing conditions of playing on an aircraft carrier docked in San Diego Bay when you're in Central New York, you can get a sense for light wind, cooler temperatures, and other variables not found when playing basketball under a roof -- or dome.

So if you live in Syracuse or are a student at the school, and frequent, say Thornden Park, Lincoln Park, or maybe the off-campus Onondaga Park, at least be on low alert that Boeheim and his army may show up unannounced ready to provide a lesson in the 2-3 zone.